As I mentioned before, I’ve been pretty overwhelmed lately. Christmas is my absolute favorite holiday. And this year, I feel like the biggest grinch.

I didn’t even want to drag out Christmas decorations this year. Finding time to decorate just seemed like too much. Because then I just need to find the time to put it all away in a month. I just wasn’t feeling it.

But my daughter insisted. And I’m so glad she did. I didn’t put up all the lights in the house. And I didn’t decorate outside as I usually do. But just having my mantle decorated (even tho I don’t have everything out yet, can’t remember where the rest of it is!) and the tree up, has lifted my spirits.

It’s those little things I’m trying to focus on this year. Not getting caught up in shopping. And I know I won’t have time to bake. But at least I know I can always find something that brings me joy.

The art of being happy lies in the power of extracting happiness from common things. ~Henry Ward Beecher

(Still debating whether to drag out the Christmas photo!)

A tree is known by its fruit; a man by his deeds. A good deed is never lost; he who sows courtesy reaps friendship, and he who plants kindness gathers love. ~Saint Basil

As I’ve been feeling a little overwhelmed lately (ok, a lot overwhelmed!), and just generally out of sorts, I decided I really need to take a moment to assess my situation. Starting with the blessings in my life. It’s so cliche, I know, but with Thanksgiving tomorrow, I decided I’d start with all the things I’m so very thankful for.

The list could go on endlessly. But the key basics are there. I know the next month will be a crazy one. My work schedule is a lot to handle. And with everything else, I know it will be tough. I’m so frustrated with the commercialization and want to really focus on what’s most important. Time with family and friends. And appreciating every moment. Living life and loving it!

I didn’t write about my Part 1 test last weekend, but I tried running some intervals last Sunday to no avail. Although my knee had been feeling fine, as soon as I started any kind of jog the pain was too much. So I just walked.

This week I have just continued my exercises to work on strengthening as I had been doing. The knee has felt fine all week, so I decided I’d give it another go today.

The forecast wasn’t great, but I wanted to try it anyway. This is what I was blessed with:

And I really do mean blessed. Although I’m more than ready to move to a warmer climate, I do enjoy running in the winter. For a lot of reasons. One of which is the beautiful scenery!

When I first started, I thought the snow might actually be good for the cushion it provided. But I think in hindsight, the reality is it actually made it more difficult as I didn’t have adequate stability for my knee. It was slow going, but at least I was able to run some intervals, so I know not all is lost. I didn’t want to use headphones, so I was just going by feel. I know it’s going to take time to get back to full running, but that’s ok. Patience. Again. 🙂

In other musings, I have discovered a few things. It’s time to invest in new shoes and socks made for running in snow. My feet are not too happy with me right now! Also outdoor running gear. My wind pants from a few years ago are too big, though I can make them work, but I also need a jacket. Any recommendations? 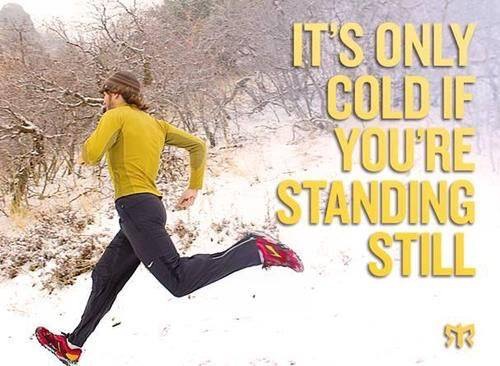 Way back a couple months ago when I started physical therapy, my physical therapist and I were talking about general stuff. You know, like what do you do for a living, family, etc. Typical small talk.

I wish I could remember exactly how he worded it. But he said he had a friend or someone that when asked about life, would respond with “Living the dream… just someone else’s dream” or something to that effect. In other words, dripping sarcasm. Not really living the dream at all, at least not the way they envisioned it.

So it was kind of a joke. Every day when I would go to physical therapy, he’d ask how it was going, and my response “You know, just living the dream.” But I’m not really living the dream at all. At least not what I had envisioned for myself.

Going back to high school, I never knew what I wanted to do with my life. I always loved math, but couldn’t see myself majoring in math in college. I just couldn’t see myself as a teacher, and didn’t know what else I would do with a math degree. So I went for accounting. And I hated it!

Last night, I had a meeting with my Money Man (what I affectionately call my financial adviser). I was talking to him about going back to school and he asked what my plans were. When I told him math, he said there’s so much more you can do with math than being a teacher! I wish I had someone to tell me that 25 years ago!

I find it so ironic that after all these years, I’m going back to school for the degree that I always wanted. I met with a college counselor on Saturday, and have been getting everything lined up to start in January. Stressful, for sure, but I know it’ll provide the challenge I need right now.

I really have no complaints about my life. I’m very thankful for what I have. And I appreciate all that I have been given. But that doesn’t mean I just want to maintain status quo. I’m still young, and I’ve got plenty of time to improve, to challenge myself. I love my job. I love the travel industry. But I also decided 4 years ago when going through my divorce that I never wanted to depend on anyone else ever again. I can take care of myself. And I want to be able to do a better job of it. And push myself.

So right now? Now it’s time for me to start livin’ the dream. Livin’ the REAL dream!

Well, I made it. Barely.

Little did I know, that almost ended up being me!

Before the race started, I warmed up with some slow jogging before joining my start corral. I stretched what little I could while waiting for my group to reach the start line. I had done a squat at one point, and felt a pinch on the outside of my left knee.

I started out slow, as I typically would for that long of a run. Not that I had much choice with the sheer number of runners. You certainly don’t run these races if you’re all about the time and competition. Weaving amongst all the walkers is a little more than a nightmare. But I was in no hurry.

I made it through 4 miles, no problem. Somewhere around mile 5, I felt that pinching feeling on my knee again. I walked a couple times for a short while, and it would go away. After mile 6 it seemed to linger more. I continued trying to push thru, but slowed my pace. Up until this point, I was probably running about 10:15-10:30 pace.

I was coming into McCormick place and things felt fine. I picked up the pace a bit, and as I was exiting, it was almost like my knee completely gave out. It was excrutiating! It hurt so much just to walk. Shortly after, there were a couple volunteers, and one lady asked if I was ok. I said I’d be fine and carried on.

I thought I was closer to the end, but I hadn’t reached mile 8 yet. Either way, I was determined to finish.

A little while later, the same lady came up behind me on a bike and asked if I was sure I was ok, and offered to get me a cart. I refused. I didn’t start this race not to finish. And as long as I could walk, that’s exactly what I was going to do.

I quickly realized that if I quit bending my knee, and kept my leg as straight as possible, it didn’t hurt much at all. I walked as fast as I could, which was pretty slow for me! I tried starting a slow jog a couple times, but there was no way I would be able to do anything that resembled running.

I wanted so bad to run this race. And it hurt so bad. Not just physically. Emotionally I was just done. All the feelings of failure kept creeping in. I wanted to cry. In fact, I had to hold back tears more than once. I couldn’t even finish strong. But I finished.

I went to the medical tent to get some ice. The lady that helped me there was trying to figure out the pain and felt it might be bursitis. But it seems like the location more resembles ITBS. I’ll give it a few days of icing and taking it easy and see how it feels. Hoping to avoid any more doctor/PT visits.

Either way, it would seem I will be launching another hiatus. I have until next June to get my act together. I plan to do this right so I don’t encounter any more problems for my half.

But right now, all I know is this – regardless of what happened today, or last month, I am not a quitter. I’ve committed to being healthier, and running. And I’m too strong to let anything get me down.

Running teaches us to keep moving forward, one step at a time, especially in the most painful moments.

I meant to write this post last weekend, but time has a way of escaping me now days. So here I am. Tomorrow is my first big race. 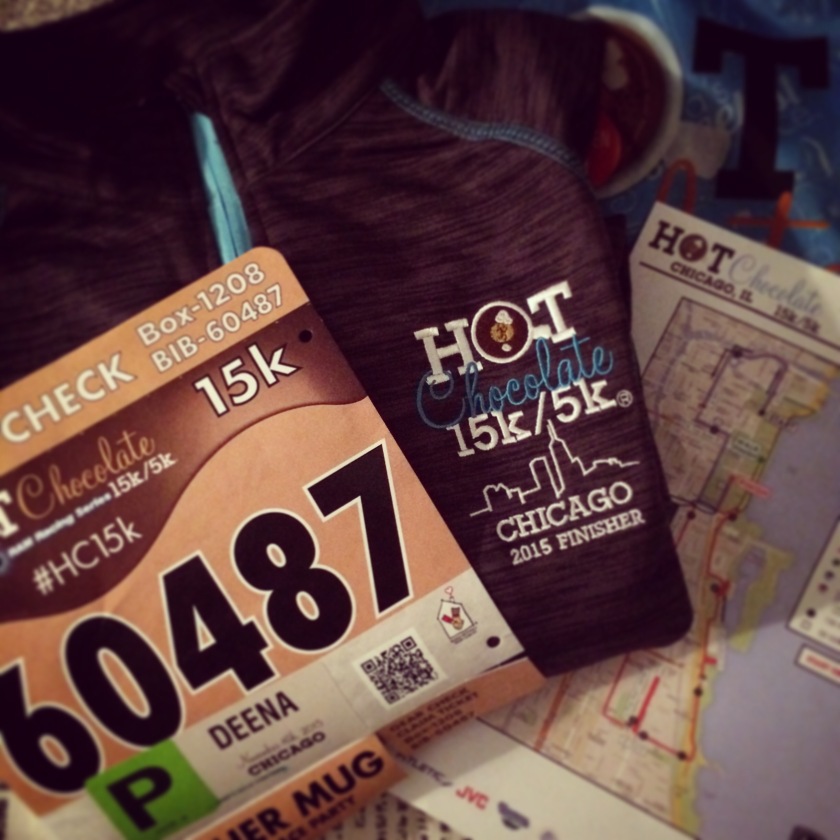 A lot of you may be thinking 15k is really no big deal. And maybe even for me it isn’t. I mean, I ran 9.3 miles once already just in my daily run. But that was once. And before I had to take time off for my foot problem. I’ve been a little nervous about it since then, but not at the same time. It is what it is. It’s not like I’m racing for time, or to compete. I’m running for me. To accomplish something I set out to do. And how I get there isn’t at all important to me, just that I do.

Last Saturday, I was debating what to do with my run. I had already worked back up to 5 mile runs, but I really felt I needed to push myself. Prove that I could log more than that before going for 9+ this weekend. I settled on a 7 mile run. It was fine, my foot hurt a bit, but I survived. If I could make it through 7, I can manage 9.3.

This week, I’ve just been trying to find the balance between letting my foot rest, and logging some miles to keep me moving. Just enough, but not too much. Hopefully I’ve done ok, and will be good to go tomorrow. My foot feels fine today, so that’s always a good thing.

So, onward and upward. I may not run my best race, but I will run the best race I can tomorrow. It’s going to be a beautiful day!